New Under Armor Speed Boot Spotted in The MLS.

March 30, 2011
Houston Dynamo's Jason Garey was spotted wearing a speed boot from Under Armor during the match against the Seattle Sounders on Saturday. 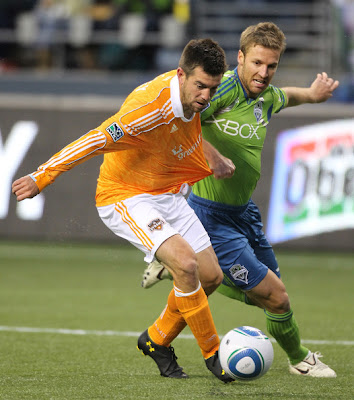 Upper seems to be extremely flexibledue to the fact that creasing can easily be seen.
They feature a logo placement on the same spot that Nike features their swoosh logo on their boots.

They feature what seems like a mixed soleplate. The 8 front studs seem to be the same studs as the one's featured on the Adidas adiZero's. The last 4 studs can be compared to standard studs found on speed boots such as the Mercurial Vapors (without the triangle openings on the studs).