January 13, 2012
In order to commemorate Lionel Messi, Adidas has created a personalized pair of boots for the best player in the world. Adidas returned to their original design of Messi's past Adizero, with a striking gold base. 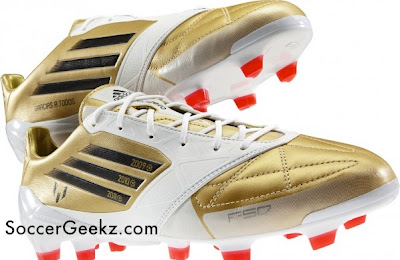 Adidas have included the three years Messi has one the award on the three stripes that lie on the outside of the boot, along with his national flag on the heel. Adidas have chosen to follow in the footsteps of Nike, as they dedicate a boot to their most famous player, Cristiano Ronaldo. However, it is reported that Adidas have chosen to keep these exclusive to Messi himself, and no other players will be able to get their hands on them.